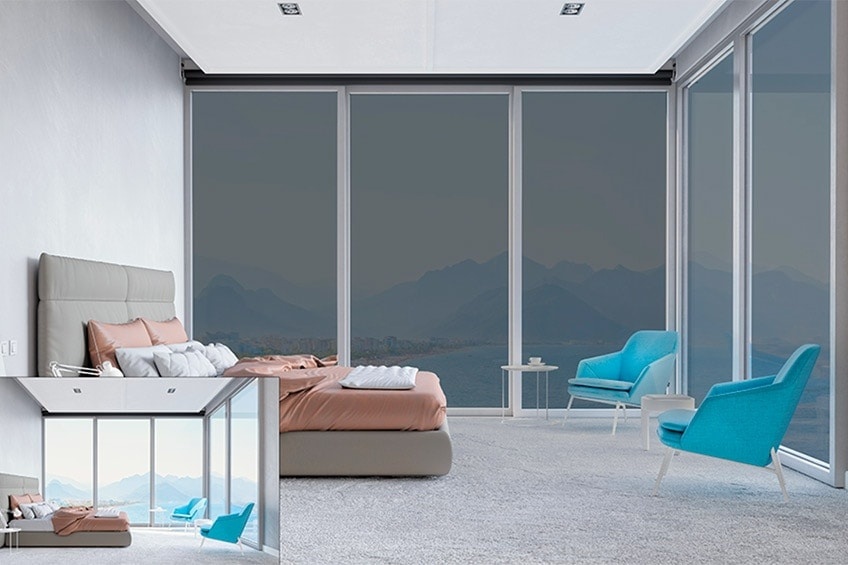 Whether you wear glasses or not, you may have heard of something called photochromic lenses. They look like clear glasses indoors but transition to sunglasses after exposure to sunlight. Photochromic window film reacts in the same way! It can be applied to flat glass surfaces, and it transitions from light to dark when activated by light.

How Does Photochromic Film Work?

Although it’s made of tiny layers of transparent polyester, photochromic film also has a special layer that reacts when exposed to sunlight. Because the film is activated by ultraviolet radiation, there must be enough light for the film to react. The glass will look clear when the sunlight is low, similar to photochromic lenses. However, the film will darken once the sun’s light strengthens in the afternoon. So depending on the time of day, photochromic film will either be clear, lightly tinted, or deeply tinted.

Photochromic window film offers tints from anywhere between 15 and 25 percent. As the film darkens, the higher amount of light and sun rejection it provides. This means you can block heat and light when you need it most while retaining as much natural light as possible.

At certain times of the day, when the sunlight hits at a specific angle, it can cast unwanted glare across computer screens, televisions, and other electronic devices. Glare isn’t just annoying; it can also lead to headaches and eye strain. Photochromic film fights glare when the sun is at its strongest to improve occupant comfort.

By helping reduce light and heat at the times of the day when the sun is the strongest, photochromic film will help save energy. Along with reduced utility bills, this type of film will make it easier to maintain comfortable interior temperatures.

Whether you’re looking into window film for your home or office, photochromic film is a unique product that works when you need it most. It lets you retain natural light while working to block light when it’s most intense. This makes it an excellent option for sunny foyers and bedrooms or in commercial buildings with large amounts of glass and light. Interested in window film for your home or business? Reach out to a window film expert to learn more!

What Is Smart Window Film?

The Many Types of Window Film